Complex regional pain syndrome (CRPS) is a disabling condition where patients experience symptoms of prolonged pain and inflammation that often develop after an injury.  It is most commonly experienced in the arm or leg and has acute (short-term) and chronic (symptoms last longer than 6 months) forms.

In the past, CRPS had been also been known as causalgia or reflex sympathetic dystrophy (RSD).  The term RSD was adopted due to the presence of symptoms such as changes in temperature, swelling, blood flow and hair loss which are suggesting that the sympathetic nervous system is involved.

CRPS is more commonly found in women and, although the evidence suggests it peaks around age 40, we have seen many teenagers suffering from it.

What are the symptoms of CRPS?

The most common symptoms include:

What are the treatment options for CRPS?

Although CRPS can improve over time it can also result in more severe and long term experience of symptoms that can be profoundly disabling.

Unfortunately, the condition is unfamiliar to many clinicians and so it can take some time to gain a referral for treatment.

Once referred a range of rehabilitation and physical therapy options exist, which provide exercises to help both the physical and neurological elements of the problem to resolve, but they often take some time to make change.

There are some drugs that show some positive benefits for the management of the symptoms of CRPS, including Non-steroidal anti-inflammatory drugs (NSAIDS) and pain medications.

Approaches that consider the importance of neuroplasticity (how the brain changes as a result of use), such as the Lightning Process provide some interesting new routes for help with this condition.  Some cases are reported here… 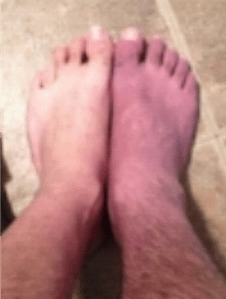 CRPS before the Lightning Process
(note colour of right foot)

Feet after the Lightning Process

Surgical approaches which cut nerves, or in most extreme cases remove limbs, are used as a rare last resort and have poor outcomes for symptom improvement.

Is CRPS the same as FND?

There are a number of debates amongst researchers about how Functional Neurological Disorder (FND) and CRPS relate to each other.  Part of the separation between these two conditions may have arisen, researchers argue, from the error in thinking that classed FND as being ‘all in the mind’.  This conceptualisation of FND has changed over the years and has now been replaced by an understanding that the symptoms are caused by issues in signal processing.  This has led to researchers suggesting that the label CRPS is unhelpful and unnecessary and those with CRPS symptoms should be included within the definition of FND.  They conclude that:

Building on this new ‘whole brain’ perspective of FND, we reframe the debate about the ‘psychological versus physical’ basis of CRPS. We recognise how CRPS research may inform mechanistic understanding of FND and conversely, how advances in FND, especially treatment, have implications for improving understanding and management of CRPS. (Popkirov et al., 2019)

Under principles of evidence-based medicine, the CRPS label should be abandoned and the syndrome should simply be considered a subset of FNDs, specifically Functional Pain Disorder; and treated appropriately.’ (Chang et al., 2021)

Hopefully, these new ideas on how to approach CRPS will encourage more research and better treatment options for those with this disabling condition.

To find out more about the Lightning Process call 07930 289 671 or email info@philparker.org